For those that have not yet travelled to Mindanao in the Philippines. Do it! There is so much natural beauty that it is outstanding. The people of Mindanao are so friendly. One of the up and coming cities is Tagum City, which is about two hours away from Davao City.

The city has a new city hall. It inspires business and is very clean and over the last few years the mayor has followed te lead of the Davao City and cleaned up the pockets of crime that caused Tagum City so many problems.

There are some great natural places to see too. 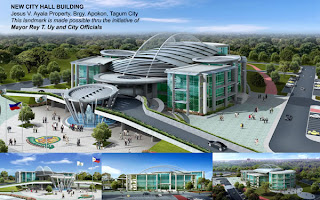 Tancuan in Bincungan, Tagum City seems like to be so elusive from the public. Not until recently when the Local Government of Tagum had embarked on a noble project of establishing a wetland reserve in this progressive southern city known for its best governance practices, palms and grand festivals. The once elusive Tancuan as well as the gentle waters of Nabintad River is now Tagum City's newest attraction. 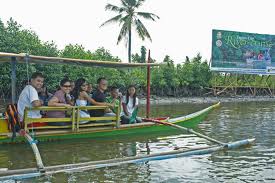 The Tagum City River Cruise was formally launched in 2011 with high hopes of revitalizing the people's interest in safeguarding the mangroves and showcasing nature inside the wetlands of the city. Staring at Punong Restaurant which is the official jump-off point for the 8.8-kilometer river cruise that will run for almost two hours. Along the way, be amazed with the wide varieties of mangrove trees as well of its unique roots. The sight of fisherfolks and children swimming along the way is also a sight to behold.  Stop by at the Kagan Village, a Muslim community in Barangay Liboganon that is brimming with culture and history. There, you can buy Muslim Handicrafts and taste its yummy delicacies. In Maningo Farm,  one of the stopovers of the 8-kilometer cruise, your group can savor sumptuous lunch with its famous soft-shelled crabs.

A floating tiange is the place to look forward to by souvenir-hunters. There, one can buy packed goodies which include tropical fruits in season, tasty delicacies and handicrafts. The River Cruise experience would not be complete without preserving the memory in your digital cameras or in mobile phones which are important so that you can upload it right away in facebook or perhaps print a postcard and encourage your friends to experience the river cruise, Tagumeño style. Under the shades of the century-old mangroves, a boardwalk was constructed for people to have a closer look at those trees and be relaxed by the warmth it gives.

To try the Tagum City River Cruise, contact the City Information Office of Tagum or the City Tourism Office or visit www.tagumcity.gov.ph for more information
Posted by Unknown at 8:39 PM